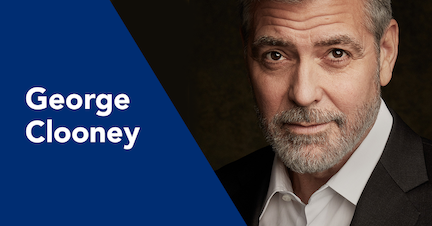 An actor who is recognized as much for his global humanitarian efforts as he is for his iconic roles in TV and film, George Clooney is the newest keynote speaker to be announced for WorkHuman 2019 in Nashville, Tenn.

The WorkHuman conference is becoming a bit of a family affair in the Clooney household. George’s wife Amal was a keynote speaker at WorkHuman 2018, where she discussed her work as an international human rights lawyer, giving a voice to those who are neglected and exploited. She brought a global and personal perspective to WorkHuman to elevate the diversity and inclusion dialogue and validate the importance of bringing humanity back to the workplace. “Humanity is not just a concept that applies within the context of law; it is something we can all practice every day in our own lives, no matter where we are and what we do,” said Amal.

At WorkHuman 2019, George will continue the discussion on how leading with kindness and compassion can create a more inclusive, rewarding, and respectful work environment.

First known for his role on the hit NBC drama, “ER,” George has since built an impressive list of acting achievements, including having been nominated in more categories than anyone else in Oscar history.

But did you know George is also a strong First Amendment advocate with a deep commitment to global humanitarian causes? He has testified in front of Congress, worked with United States presidents, two secretaries of state, and dozens of senators to help bring peace to South Sudan.

In line with his humanitarian efforts, George has also been a strong advocate of eliminating sexual harassment in the workplace, an issue WorkHuman continues to shed light on since its historic #MeToo panel last year. “It is infuriating that women still face sexual harassment at work, regardless of the type of workplace,” said George. “As a society, as a culture, and as workplace leaders, we need to make sure we provide work environments where women feel safe to come forward with their stories. We also need to ensure strict action against those who perpetrate these crimes or turn a blind eye toward them. The time is now to make all workplaces safe for everyone.”

Over the years, George has always been about action. He has produced three successful telethons – “The Tribute to Heroes,” “Tsumani Aid: A Concert of Hope,” and “Hope for Haiti Now,” which raised a record 66 million dollars. In 2010, George, along with the United Nations, Harvard University, and Google, launched the Satellite Sentinel Project, which allows private satellites to take photographs of potential threats to civilians, detect bombs, observe the movement of troops, and note any other evidence of possible mass violence in North and South Sudan. He also co-founded The Sentry to use forensic accountants to follow the money stolen from citizens of Sudan and South Sudan by their governments.

And if all that weren’t impressive enough, George is also a successful entrepreneur. He and two friends founded one of the fastest-growing tequila brands in the world by accident in 2013. Last year Casamigos was sold to Diageo for $1 billion.

March 18-21 George will be in Nashville, along with Viola Davis, Gary Hamel, Brené Brown, and Kat Cole, sharing insights and next steps for bringing more humanity into the workplace. Will you be there? Register now.

Sarah is managing editor at Workhuman. When not writing about all things WorkHuman, leadership, recognition, and appreciation, she enjoys iced coffee, running, and spending time with her daughter, Mabel.
By continuing to use this site without changing your settings, you agree to the use of cookies in accordance with our Cookie PolicyOK